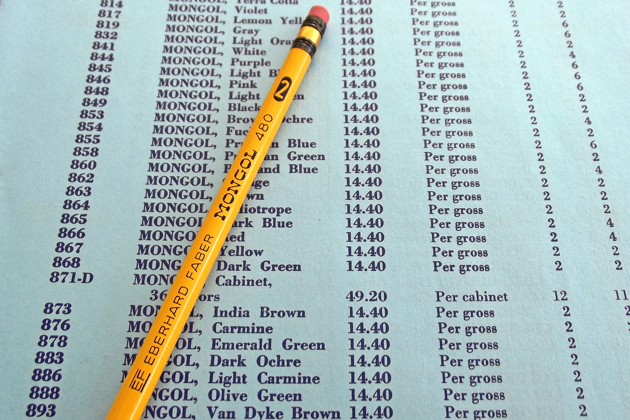 I never quite warmed-up to the Mongol.

It’s one of Eberhard Faber’s oldest brands, dating back at least to the early 1910s, and there have been many iterations of this pencil. Perhaps that’s why I have been less interested in this one; there are just so many of them. The one pictured above is the less-commonly seen round Mongol 480—it’s very comfortable to hold, and despite being a No. 2 pencil it writes more like a No. 1.

For many people, the Mongol was their standard No. 2 pencil in school, but for me that pencil was the Dixon Ticonderoga so I don’t associate it with those early years. From what I can tell though, through the volume and variety of vintage advertisements as well as sources such as Petroski’s The Pencil, the Mongol was nothing if not ubiquitous. The packaging for the Mongol—including the typography used for its branding over the decades—was very eye-catching. I especially like the imprint on this version of the pencil:

The Mongol was also at the center of a scandal involving Damian Hirst, himself no stranger to scandal. An installation of his included a box of Faber-Castell Mongols, which was stolen and held for a kind of ransom (the teenaged sneak thief who took them threatened to sharpen them). For being part of the exhibit, they were valued at £500,000.

This entry was posted in Pencils and tagged Eberhard Faber, Mongol Pencil. Bookmark the permalink.

This site uses Akismet to reduce spam. Learn how your comment data is processed.